Gluten Free in a World of Wheat 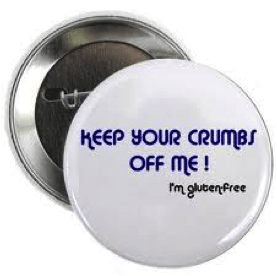 This month is Celiac awareness month, which is a special month for me personally as I am living with Celiac disease and it’s the reason that I created my private functional nutrition and lifestyle design practice. It was June of 2008 that I was diagnosed with Celiac disease, I remember it like it was yesterday sitting in my ND’s office next to my boyfriend when she said, “Colleen, you have Celiac disease.” I had to ask her to spell it. I had no idea what the hell she was talking about. My boyfriend asked me, “Are you going to be like this forever? No pizza? No beer? What?” I told him that I didn’t come with a refund policy and he was stuck with me. We are not together anymore which makes it funny to me, still.

At that moment, all I knew what that there was now a light at the end of the tunnel to why I felt so bad all the time. Celiac disease is a genetic autoimmune disorder that’s affecting both children and adults. People with Celiac disease cannot consume foods containing gluten, a major protein in wheat, barley, rye and oats.

An autoimmune disease is characterized by tissue damage and loss of function due to an immune response directed at a specific organ. Gluten triggers an autoimmune response in the body that causes damage to the villi in the small intestine. The body produces antibodies that attack the small intestine which causes damage to the intestine, therefore proper absorption of nutrients is impaired and can lead to further illness.

Rewind three years earlier…I was dancing professionally, living in Charlotte and taking medicine so I could go to the bathroom. Seriously, I would have to plan my day around the time I had to take my medicine so I could use the bathroom in between rehearsals and before I had to go back to the studio in the evening. It was hell, but it was the only thing that I knew to do at the time. I had recovered from an eating disorder shortly before my diagnosis. That, in and of itself, was rough. Imagine, starving yourself for a couple years because every time you ate you felt like crap. Then, throughout recovery, eating again and gaining weight while feeling like a blob and walking around with a chronic migraine and constipation. Sign me up right?

The only thing I knew how to do was just try and listen to my body. So, in the mix of recovery, I graduated from college, ended my dancing in Charlotte and moved to Atlanta. I started school at Atlanta School of Massage, I did not want anything to do with ballet because, let’s face it, being in pink tights and feeling like a balloon isn’t the most flattering thing you know.

One day I finally had enough of my headaches and stomach aches, so I made an appointment with a naturopath. I kid you not, I told her what I ate and she said she was going to test me for all these things, but she strongly felt like I may have an issue with gluten. Fast forward 1 week and boom! Celiac was confirmed among other lovely things like leaky gut, food sensitivities and low vitamin D. You name it, I was a MESS.

I always get asked if I had symptoms in my younger years before puberty and I didn’t. I never really had an issue with going to the bathroom, headaches or bloating until I hit 18. I was under a pretty good amount of stress. We were moving houses, I was graduating from high school, auditioning for ballet companies and I started birth control because I didn’t have a period anymore…. When I say a mess, I mean a mess! So, more than likely, something in those years flipped that lovely Celiac gene to on and once it gets turned on, it cannot get turned off.

I just recently did a DNA test on myself to dive further into customizing nutrition for myself before I start adding it as a service. I have BOTH of the Celiac genes! I originally only thought I had one, but I have both. More than likely, my children will have it as well. I used to get mad at it and curse it, because I had no clue what to expect or how to look for gluten. Sh*t, I didn’t even know what to eat! I remember going to Panera with my boyfriend at the time and eating white bread instead of wheat…. Yeah, that’s how it went for a while because no one knew half of what we know now. There were NOT gluten free options anywhere y’all…. None. And I had to figure out what the hell my body was going to go through as it was going through it. This is when I made the promise to myself that I was going back to school and I was going to start my own business because living gluten free in a world full of wheat is HARD Y’ALL! When I told people back in 2008 that I had Celiac disease, I was asked to, “Come again?”  Let’s just say, it took me three years to finally start feeling better. I mean, I did feel better immediately after eliminating gluten, but my body started to freak out again. Thank goodness I was back in school for nutrition and loved research. I spent all of time examining Celiac disease and food sensitivities. While I was in school, I started digging into the immune system and how foods affect its activity. That led me to food sensitivity testing. I had done this before, but this time I had a little bit more knowledge as to what to expect.

At that point, I had been gluten free and soy free for a while, but headaches came creeping back in… misery yet again. This is when I found the MRT test. I was miserable, like really miserable. I wouldn’t want to go to social functions because I was afraid my body would decide to have a migraine that night. I couldn’t risk that at the time, because I either threw up or I had a bloody nose with it. So I went through the training to become a LEAP therapist and did the test on myself. It changed my life! Going gluten free is easy, but it’s all the other crap in our foods that is making us sick. This became very clear after my test results came back. Reading labels pissed me off because there is so much junk in our food that is NOT food and doesn’t need to be there. That’s how I got into this whole mess of health at such a young age. After navigating that for a few months, I started offering it in my practice. It has changed my life. I am migraine free except for the rare, occasional one, I can poop without any worry, I feel good in my body, I lost weight without even trying and oh yeah, I have energy! So, if it weren’t for Celiac disease, I wouldn’t have the most amazing business, with incredible clients and you all that are reading this right now. I wouldn’t be on your computer screen letting you know, I’ve been through this sh*t too and you don’t have to feel the way you are feeling forever. There is a light at the end of the tunnel!

If this resonated with you, I would love to hear from you!